Several outcrops around Mouthmill have been used to date the rocks found around this area of the North Devon Coast, enabling correlation with the coalfield areas found elsewhere in Britain and Europe.

The impressive Blackchurch rock, which is a large arch stack found at Mouthmill, provides exposures of the Hartland Quay Shale that contains goniatite fossils. Goniatites are also found at two sites where there are exposures of Gull Shale Rock - two anticline structures (folds with the fold axis at the top)  300m and 400m southeast of Blackchurch Rock. It is the types of goniatite found in the ‘marker horizons’ of these features that have helped to date the rocks.

The coastal cliffs between Clovelly and Mouthmill provide good exposures of the Upper Carboniferous Crackington Formation that have been affected by large-scale folds formed during a mountain building event, known as the Variscan Orogeny, and form part of the Marsland to Clovelly Coast Site of Special Scientific Interest (SSSI).

This isolated cove has long been associated with smuggling activities. The exact site of the former mill at Mouthmill is unclear, but you can still see the remains of an old limekiln whose limestone and coal would have been brought in via boat.

There is parking at the National Trust Brownsham Carpark and a walk down to the beach through Brownsham Wood. Please keep an eye on the tides, the sites must be visited on a falling tide. Mouthmill beach is a cobble and boulder beach, so strong supportive footwear must be worn. 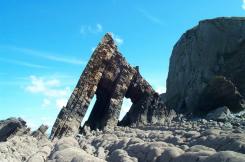