As well as a popular Local Nature Reserve, a hike up to Hillsborough will reveal the remains of an Iron Age hill fort, the largest cliff castle in the south west and around 2000 years old. Gaze across the stunning landscape from the summit of Hillsborough and you'll see why this location offered such an enviable strategic position. The harbour provides a safe haven from the perilous coastline, while the hills form a natural barrier to the landward side.

Though the wooden defences of this scheduled ancient monument have long since vanished with age, you can still see the high banks which formed the ramparts guarding the inturned entrance of this impressive fort. The site is undoubtedly both important and complex. In the 1930s, workers disturbed what are believed to be even earlier bronze age burial cysts on the side of the hill, and bronze age artifacts have been found in the local area.

Recent archaeological project work involving volunteers and Birmingham University (supported by North Devon Coast AONB, Biosphere and North Devon Council) has started to reveal just a few of Hillsboroughs secrets, which are shared through new interpretation boards on site. Take a look through some of the resources on the right of this page.

Interestingly, Hillsborough is also one of the earliest examples of conservation schemes in the area - arising when the quiet, recreational facilities of Hillsborough were threatened by developers in 1895. Ilfracombe Urban District Council came to the rescue and purchased Hillsborough (now a Local Nature Reserve), prompting The Journal to run the headline "Saved from the builders' hands."

In 1988, the film Paper House was shot along the cliffs of Hartland Quay (the Warren) and scenes of a fake lighthouse were created on Hillsborough above Ilfracombe Harbour.This dark fantasy film starred Charlotte Burke, Elliot Spies and Ben Cross

A great spot for walking, wildlife watching and picnicing - all amidst spectacular views of the coast and harbour 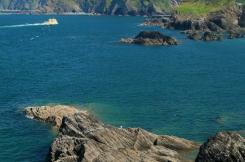