Braunton's Great Field truly lives up to its name. It is treasured as one of only two surviving medieval open strip field systems in England and is believed to date way back the 1200s. Here you can walk through a medieval landscape; covering an area of around 350 acres (equivalent to 200 football pitches). Such fields were the norm in medieval England but virtually all have since been lost or modified.

This huge field would have been used by hundreds of landworkers, busily farming the food they needed to support their families. The land was farmed in narrow strips, most comprising of 22 yards (one chain) by one furlong (220 yards) in length, which interestingly makes an acre, which it was said was the amount an Oxen could plough in a day. Clusters of strips were given field names such as Gallowell, Pitlands, Longhedgelands, etc.

In 1840 it was recorded that the Great Field was divided into some 600 strips in 60 different ownerships. Today the land is worked by just a small number of farmers but clues to the field's ancient heritage are easy to spot. Although some of the distinct landsherds (small mounds of earth separating the strips) have been lost through modern farming methods together with the Bond Stones which marked division in ownership, many landsherds and the furlough boundary tracks still remain in place. 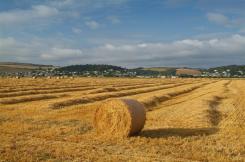