During World War II the Braunton Burrows provided ideal conditions for assault training by the American troops preparing for D-Day. Join us and Richard Bass, a World War II historian, for a fascinating look at Braunton’s important role in the war and how remains of the American’s stay are still a visible part of the areas heritage today.

This online event will be presented over Zoom. After Richard’s presentation there will be an interactive Q&A where you will have a chance to pose your questions to the speaker.

Richard Bass has spent many years researching the links between American forces and the west of England during World War II and uncovered the forgotten history of the U.S. Assault Training Center where troops trained for their spearhead role upon the beaches of Normandy.

Working as a battlefield guide in Normandy and Europe presented the opportunity to gather stories from veterans at first hand resulting in Richard writing several books covering American troops training for D-Day, the day itself and beyond, fighting their way across Europe.

To book or find out more visit the Braunton Countryside Centre website. 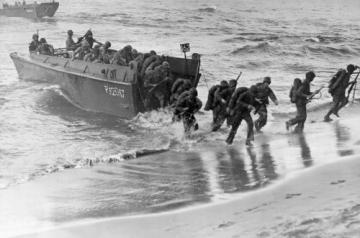